The water temps in Puerto Vallarta are still very high for this late in the season normally by the first week of December the bigger Blue and Black Marlin fishing season is over but we are still catching alot of Blue Marlin on 8-10 hr Deep sea fishing charters.  We are also catching Dorado, and Sailfish.  Inside the bay on 4 and 6 hr fishing charters we are catching Jack Crevalle, and Small Dorado. See Fishing Charters or contact us for more info 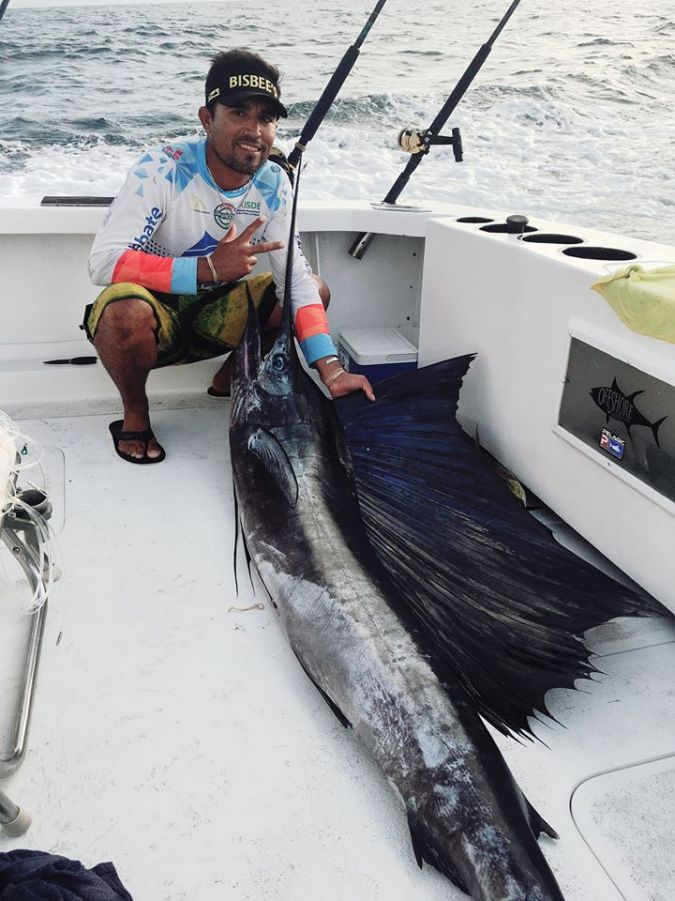 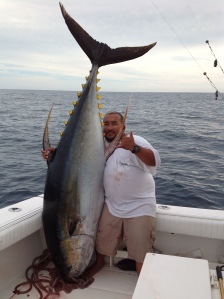 Captain Steve Torres and Team My Marlin headed out for overnight trip for 36 hrs looking for Tuna.  The Crew did not find the Yellowfin this trip but did find Blue and Black Marlin and a few Sharks.  Team My Marlin released 3 Blue and boated a Black Marlin. 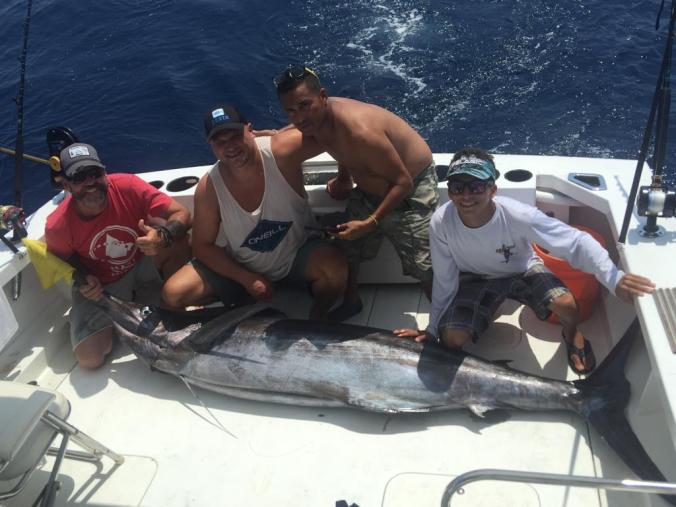 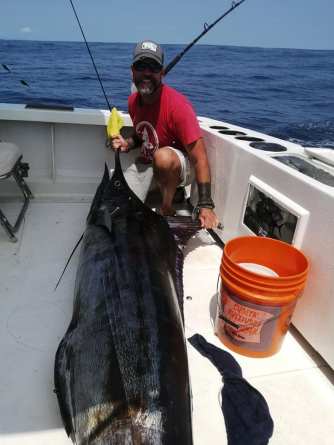 Puerto Vallarta Overnight Tuna Fishing report July 5 and 6 2019
Epic 2.5 day 60 hour fishing charter with captain Steve Torres this last weekend
the Team found the Big Tuna’s 120 + miles offshore boiling. The Tuna’s average
size were about 150 to 200 lbs and the biggest one was around 300 lbs. 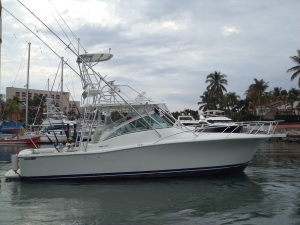 Team My Marlin win 1st place Marlin with a 517 lb Black Marlin
Day 1
1st day of the tournament captain Steve decided to head north we had spotted some big Dorados in the same area the day before and decided to test our luck but it was cold not even a bite.

Day 2
Captain Steve said we are going to the bank to troll some big live baits and catch a Marlin around 10 am that’s exactly what happened the black Marlin hit a live skip jack leaped in the air and the fight was on 1 hour 10 minutes later the beast was on the boat great fight great video of the Black marlin leaping in the air the Black Marlin set a new record for San Blas Tournament 517 lbs!!

Day 3
We hit the bank again lots of bait and smaller tuna’s we hooked 3 smaller Yellowfin tuna’s in the morning all about 30-40 lbs then decided to troll back slow and see if we pick anything up, around 1 pm We had a big Dorado strike the crew reeled in the big Dorado in about 10 minutes and We headed back. The first 2 days there had not been any qualifying Mahi mahi so we headed back for weigh ins and thought we had won Dorado also but 10 minutes to 6pm We were knocked down by .8 of a kilo so we took 2nd place Dorado 33 lbs and 1st place Marlin 517 lbs.  Great Fishing Tournament We will definitely be back next year 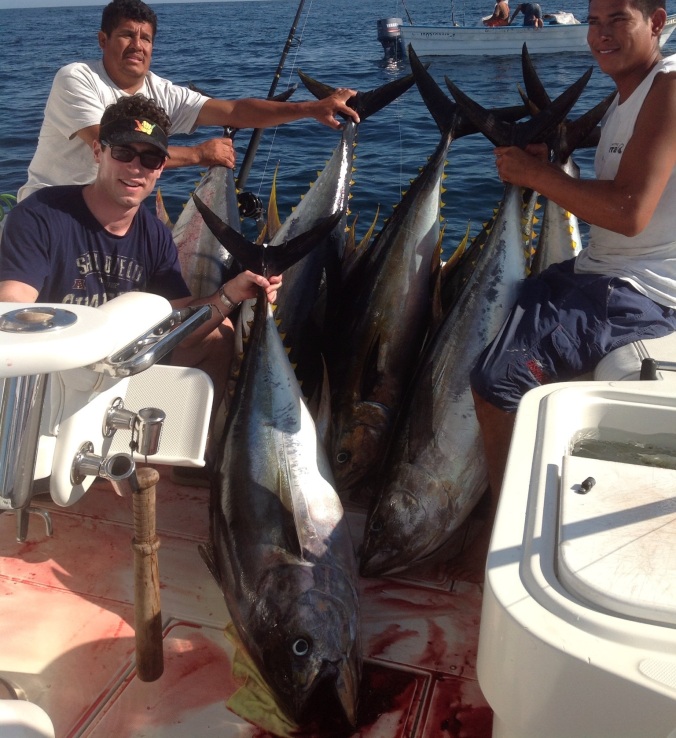 My son and I took an overnight charter from Nuevo Vallarta March 1st to the 2nd with Team My Marlin, Captain Steve, Freddy, and Alex. We left at 2 am and went to sleep in the comfortable forward sleeping quarters. I awoke during the early am hours as nature called and noted that we were pulling a Panga behind us. I thought that we had stopped to help a disabled Panga and went back to sleep. We were awakened by Captain Steve yelling get your a…. up were hooked up on a nice tuna. We rushed out and no sooner than we were on deck another hook up occurred. Now my son (33y/o) and I were both hooked up on the biggest tuna of our lives and virtually giddy and unable to stop smiling.  We were out 70 miles or so and it was the fishing charter of our lives. Totals were 21 tuna and 4 dorado.  Steve is a kite master and to see a tuna hit a Caballito is like a bomb exploding on the surface of the sea. SPECTACULAR!!!!! After it was all said and done we had two around 180 lbs and 12 in the 100 lb range, with the smallest about 45 lb. One dodo was around 35 lb and the rest smaller. The crew was first class and Steve confirmed why he has won so many tournaments. This guy is part fish! The crew was magnificent as well. We lost only one of every 5 hook ups which is pretty good for this size tuna. We hooked several ourselves which is even better than a hand off or kite hook up.Back to the panga? Turns out Capt. Steve was so confident of a big trip that he pulled the panga behind us specifically for the large ice capacity in the middle of the panga. There were 3 young guys on the boat and they fished around us for the entire trip. The fish never even got close to warm and were either on a stringer along side the boat or in the ice chest of the Panga.  Freddy the Filet showed his mettle as well with his expertise at cleaning and filleting these big boys for us.
Trip Date March 2013
Ben and Benny Hourani

Team My Marlin with 1st Place Marlin with a 481 lb Black Marlin
Team My Marlin win the  56th annual international Sailfish and Marlin Tournament with a 481 lb Black Marlin.  Captain Steve Torres caught the Tournament winner the 2nd day of the 3 day tournament with live bait on a down rigger trolling the canyons at El Banco. We started the day at 1 am lost 2 smaller Marlin early in the morning but it was all worth it when this 481 lb black Marlin hit the decks about 12:30 in the afternoon.

I had the opunity to go out on a 12 hour day of fishing with my wife, daughter and father on the”My Marlin,” skippered by Steve Torres and crewed by Oscar on 12/29/15.
This is the second year going out w Steve and he does not disappoint. Starting with Damon who does a great job in setting up the trip and communicating all neccessary details, I wanted to have the opportunity to catch a
marlin as well as dorado. Steve and Oscar did an outstanding job letting us know what to expect and how the day would unfold. We trolled and had an early dorado hookup. Later Steve found floating debris and it was game on with the dorado. We caught five monster dorado (mostly bulls) I missed one. That gave us a total of 6 for the day. Other boats came to us after seeing our hookups. They weren’t catching anything upon arriving; we had the right bait. The best was yet to come. After about 15 minutes of beginning to troll again, the marlin
hit. With superior boat control by Steve, I was able to boat my first blue marlin after a 1/2 hour fight, weighing in at approximately 300 lbs. Right after it was over, Steve said, “Let’s get another one.” That’s confidence. My
family and I vacation in PV every Christmas and I would never consider another boat or captain.
Reviewed January 2016
Paul S

Puerto Vallarta fishing Charter Review aboard the My Marlin October 2016

Great time on the My Marlin. Captain and first mate were top notch and ended up putting a nice blue on the boat. 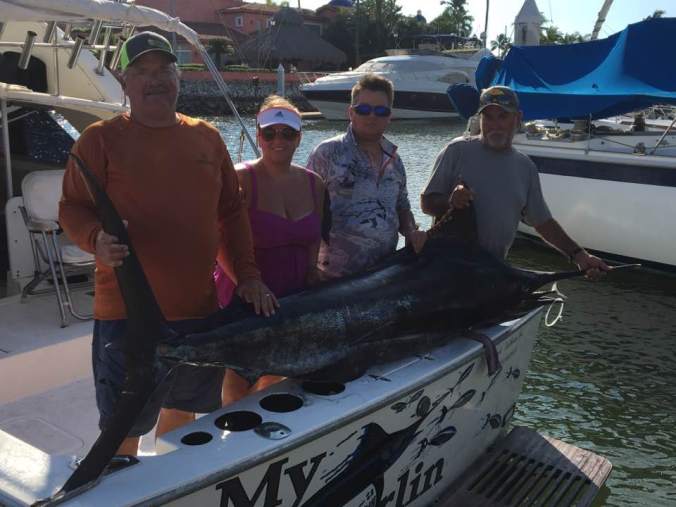 September – November are alot of fishermen favorite months to fish in Puerto Vallarta these are the months where everything is biting offshore Blue and Black Marlin, Sailfish, Yellowfin Tuna, and Dorado.  You might be lucky enough to even catch all 4 in just one fishing charter

We have a big month of Yellowfin Tuna fishing this last month the big bite continues about 15 miles past el banco so even though the fishing is hot do not think it will be a easy task. It is still about a 3 hr ride from the Marina so if you after Tuna you need a 14 hour to overnight charter. It seems we are finally in between seasons for Billfish I did not think it was going to slow down since Marlin and Sailfish have been biting consistent all year I guess all good things must come to an end but the big question is when will the Billfish bite start again Normally the Blue and Black Marlin fishing season is mid June to mid December but this last year it has been from June to March with even still a few caught in mid March.